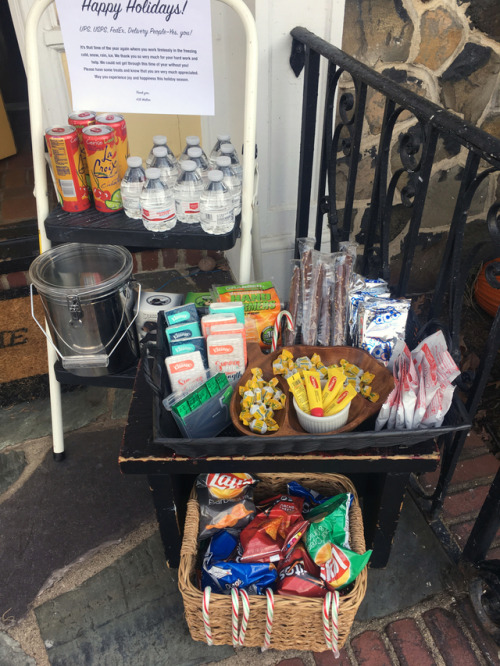 Today the Department of Awesomely Good Deeds salutes Michele Boudreaux in New Jersey who sets out boxes of treats, drinks, and cold weather supplies for delivery drivers working extra hard during the holiday season. But she’s got some competition in the form of wily squirrels who’ve decided the treats are theirs for the taking, especially the chocolates.

“On Monday, I put out this year’s treat table and—NO JOKE—within a few hours, ALL the Ghirardelli chocolate squares were gone. I couldn’t believe it. Why would someone do such a thing? And why would they take the most expensive chocolate on the tray? Why not rob us blind of all the Reese’s and Mini Snickers since I can’t seem to stop eating them because holy crap, trash candy is so damn good and I totally don’t choose Us Weekly over Time while in the waiting room.

But, no. This thief took the good stuff. And I wanted to cry. It was day one and already two packs, like 25 pieces, of Ghirardelli squares had been taken from us.

My husband, being an anti-surveillance nerd who is aware of all the myriad ways HUMANS are tracked constantly, decides to set up a small camera. Not that we’d do anything about it, should we find the thief. We aren’t like that. The chocolates are free, after all. It was more about KNOWING who would do such a thing. Who can eat that much Ghirardelli?”

Here’s the footage revealing the identity of the chocolate thieves:

Boudreaux then started keeping the chocolates in a jar that requires opposable thumbs to open, but that hasn’t stopped the relentless rodent thieves from taking snack bars, Ricola cough drops, and even tubes of Blistex.

Follow Michele Boudreaux on Instagram or her blog to keep up with the latest news about her sneaky squirrels. More security camera footage of them can be found here.