Yes, there are women who are into Star Wars, and some people can’t believe we’re still having this conversation. If you’re wondering why it’s come up again, it’s because fans are annoyed after Cosmopolitan printed a Star Wars 101 article that’s so fluffy and patronizing it’s kind of hard to believe it’s real. This Twitter user spotted the article that basically implies that millennial women⁠—yes, that would be women in their 20s and 30s⁠—would only potentially be interested in the series for the opportunity to lust after brooding villains (and have no cultural references from before 2010, for some weird reason. Who talks like this?)

This Cosmo article had people rolling their eyes

The tired article reminded the internet of a couple of years ago, when people were surprised by the proportion of women, over 40% of opening night audiences, turning up to see new Star Wars releases, and the internet argued that while the introduction of some new heroines might have driven statistics up a bit, this was no new phenomenon. 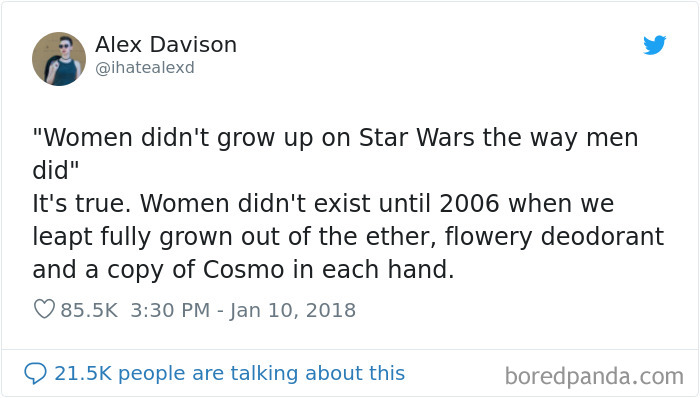 Our favorite picture to pull out when anyone questions whether women in fandom are a new trend is this awesome picture that an old-school Star Wars fan posted of a teenage girl posing in a costume that she made just after the release of the very first Star Wars film, A New Hope. Early cosplayers didn’t have many references to work with before the age of the internet, which makes her dedication especially impressive.

The picture drew comments from people for whom, regardless of gender, Star Wars and other sci-fi series were big parts of their childhoods. We think “not understanding statistics well” nails it… science fiction history scholars say that even in the 1940s, with the rise of printed science fiction, polls indicated that between 40% and 50% of readers were women. Doesn’t look that different from the amount of young women heading to theaters to see Star Wars 75 years later. The conclusion? Humans just like fiction, so let’s retire this stereotype that geeky women are a rare species.

Here’s what commenters had to say