Yesterday, at approximately 2.40pm local time, a terrorist attack on London’s houses of Parliament in Westminster left four people dead and around 40 people injured. An individual driving a grey Hyundai rammed into several civilians on Westminster bridge and then proceeded to stab 48-year-old police officer Keith Palmer, who died shortly after.

The attacker was subsequently shot and killed by police, the emergency services administered urgent aid to those injured and the London Metropolitan police raided six properties, making seven arrests. British Prime Minister Theresa May called the incident “a direct attack on British democracy”. 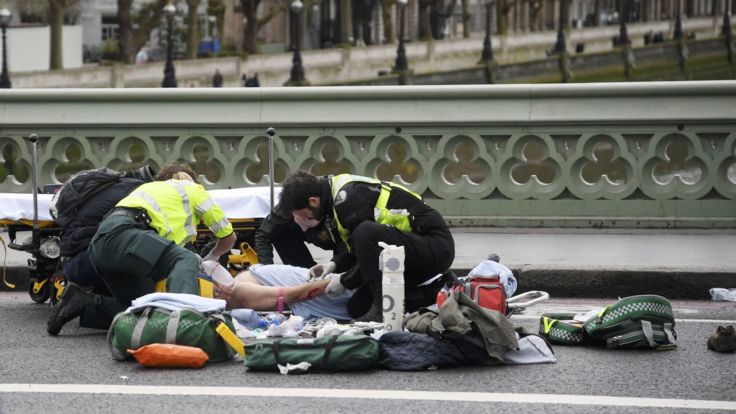 The purpose of any terrorist attack is not solely to spread fear and cause suffering, but also to create mistrust and confusion. In all the media furore, several unsubstantiated claims have surfaced, which we can now disprove. Keep an eye out for these mistruths if you see them on your newsfeed.

British broadcaster Channel 4 reported that a man named Abu Izzadeen was the main suspect in the attack, yet Izzadeen is currently serving jail time. Izzadeen, formerly Trevor Brooks, was imprisoned one year previously for breaching the Terrorism Act by leaving the UK illegally. In 2008 he was sentenced to four and a half years in jail on charges of funding terrorist movements overseas. Channel 4 News editor Ben De Pear tweeted: “Tonight our trusted Correspondent @simonisrael made a mistake in naming the wrong person as the suspect in the parliament attack. In years of award winning coverage @simonisrael has rarely been wrong; tonight he was. Abu Izzadeen is in prison and not the suspect”. 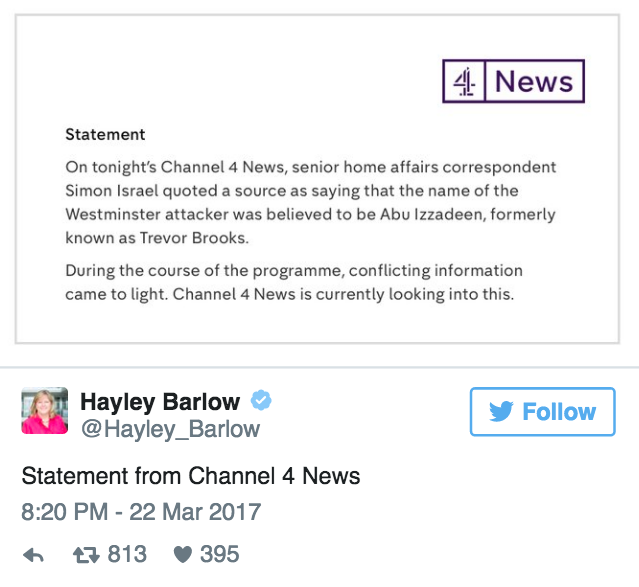 Russian media outlets have claimed that the following image shows the perpetrator holding a knife to his own neck moments before stabbing PC Palmer. “This is him a few seconds before he attacked a policeman and a few seconds before he was shot,” a Russian TV host stated. “He has a normal kitchen knife, which you can buy in any store.” It was later confirmed that the image used in the segment is actually a picture of Talhat Rehman, a mentally unwell man who was tasered by police in 2013 for wielding a knife outside Buckingham Palace. 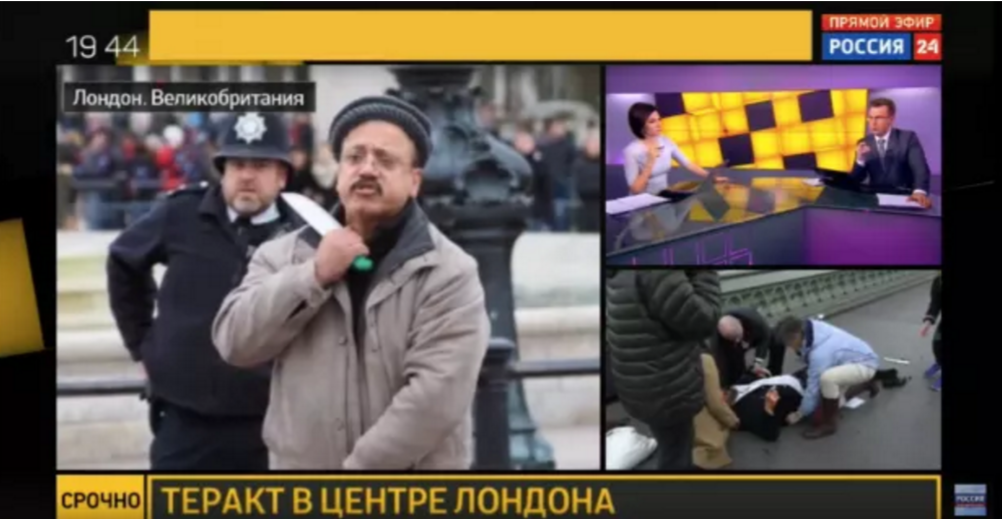 The following screenshot of Al Jazeera’s Facebook Live video of the incident was retweeted widely, and purports to show a number of laughing emojis covering the screen. Many right-wing media outlets claim this proves that the Muslim world is laughing at the plight of the affected victims. However, a cursory glance at the total number of reactions for the video reveals that only a small proportion of viewers used the laughing emoji. Furthermore, there’s no way to prove whether the total number of laughing emojis were caused by many people or one troll using multiple accounts to bolster the numbers. Either way, there have already been a number of sympathetic responses from Islamic organisations. 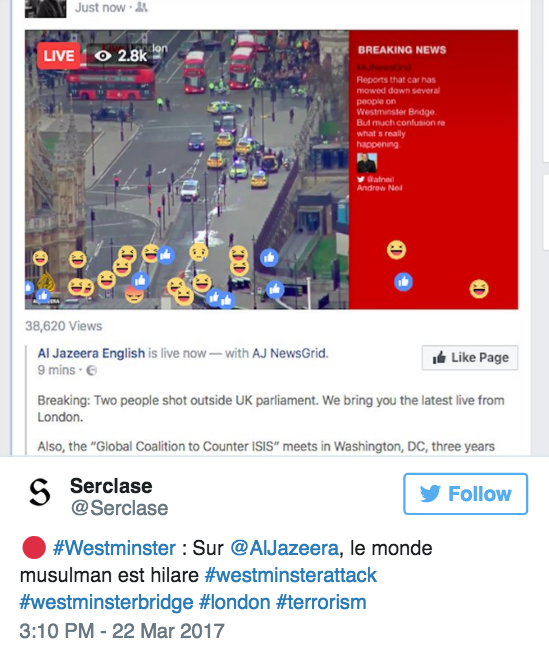 Shortly after the incident, Donald Trump Jr, son of President Donald Trump, tweeted the following interview with London mayor Sadiq Khan, in which he appears to claim that terrorist attacks such as yesterday’s are “part and parcel” of living in large urban areas. Trump seems to believe that this statement was made in the immediate aftermath of the attack, when in fact the quote has been taken out of context from an interview with British newspaper The Independent in September of 2016. 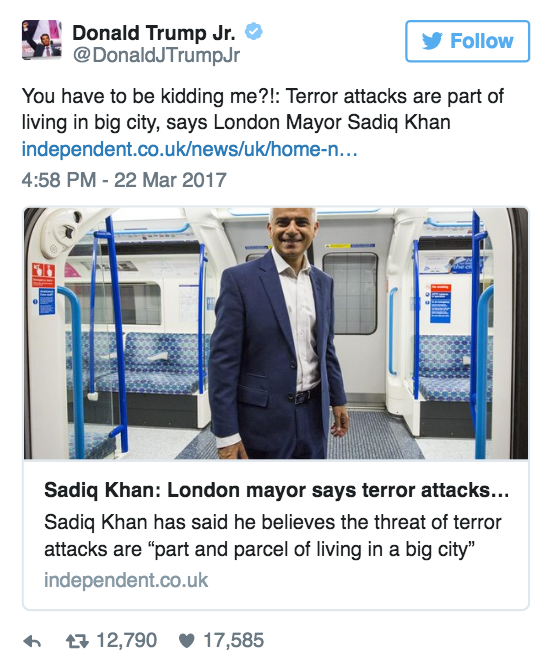 This is an old hoax that seems to get dragged out whenever something tragic happens. A number of people on social media have alleged that the comedian and prankster Sam Hayle is responsible for the attack. It’s unknown why so many people have perpetuated the hoax that Hayle is responsible for the attack, but in the past Hayle has been blamed for the San Bernardino and ULCA shootings. 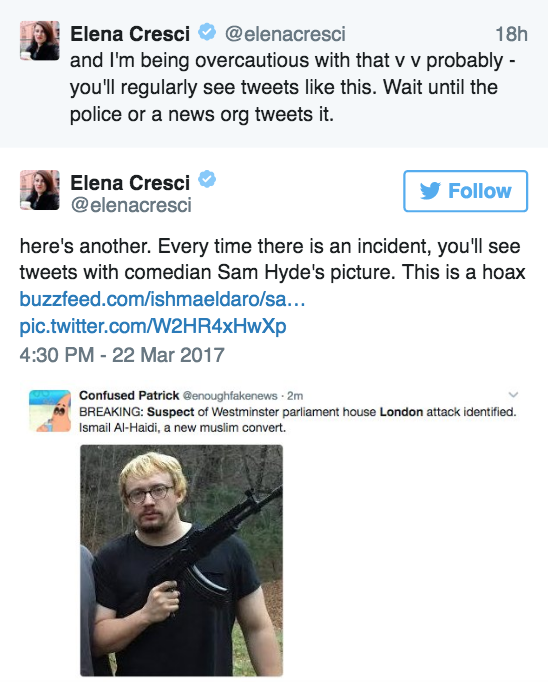 A number of Mexican Twitter-users have alleged that the journalist Tamara de Anda was a victim of the attack. In reality, de Anda was nowhere near Westminster at the time of the incident and is alive and well. 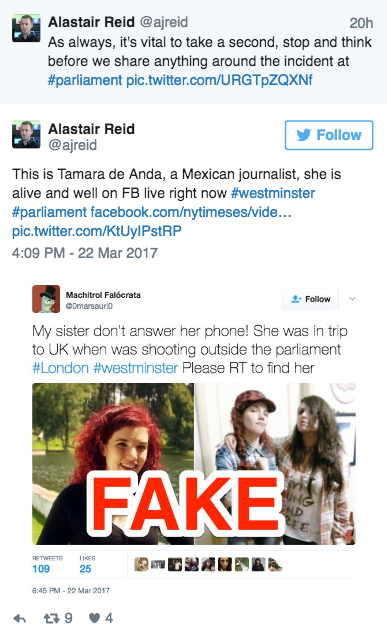 Even more bizarre is the claim among some conspiracy theorists that the attack was an inside job or was a rehearsed drill designed to manufacture panic among the British people. The website Nodisinfo has questioned the veracity of a number of images of the attack and has alleged that the dead or wounded people featured in the incident were paid actors. The site claims “the London terrorist attack is a non-event, a mere drill: an absolute fake and hoax,” and uses a number of images taken out of context to try and prove this farfetched claim. 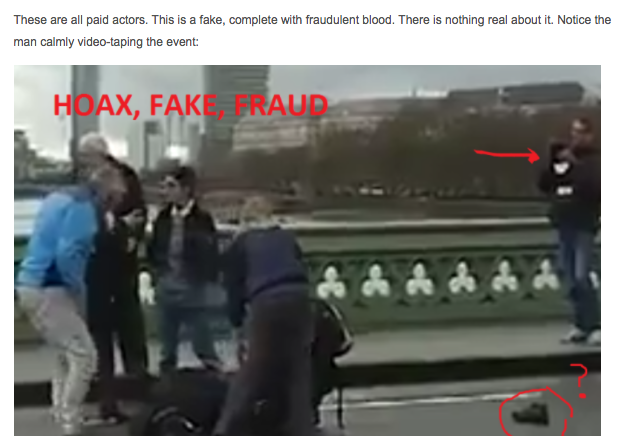 The attitude of “Keep Calm and Carry On” is one that Brits are rightly proud of in times of strife. But the famous red and white poster was never even used in the blitz (2.5 million copies were printed but never publicly displayed). Similarly, although it might encapsulate the British attitude of stiff upper lips in adversity, this image of a poster in the London Underground is a fake. You can create your own fake sign using this generator. 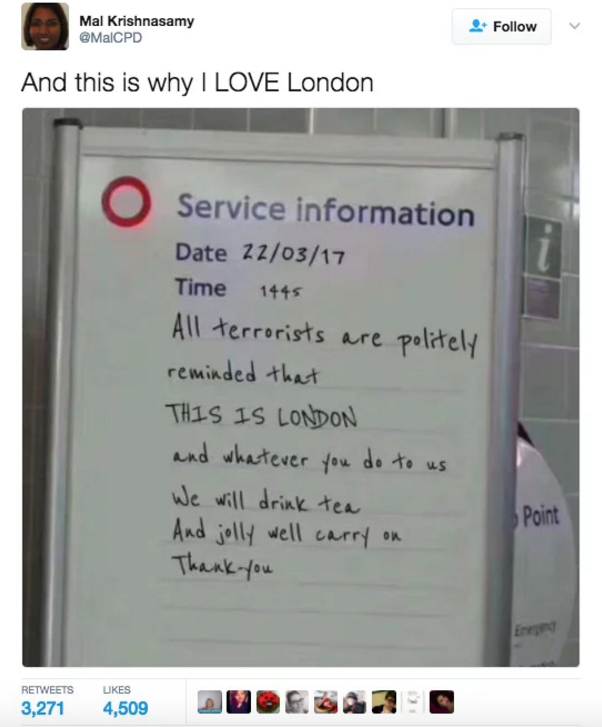 The perpetrator of the attack has still not been named but the official stance of police investigators has been to treat the incident as an act of terror. Our thoughts and prayers go out to all those affected by the tragedy, and we urge those living and working in the area to remain strong.

The post Here Are Some Things Not To Believe About The London Terror Attack appeared first on Viral Thread.