In addition to “benching” and “breadcrumbing,” there is new and insufferable relationship term you can add to your arsenal of obnoxious relationship habits: “cushioning.”

I know what you’re thinking, and no — “cushioning” does not involve hooking up on an especially squishy couch, or incorporating a pillow into any of your sexual practices.

In actuality, “cushioning” is basically akin to pre-cheating on someone.

So let’s break it down: “cushioning” is when you’re dating or in a relationship, but you set aside some “just-in-case” guys — i.e., you text with them and chat them up, although things never progress to a physical level. 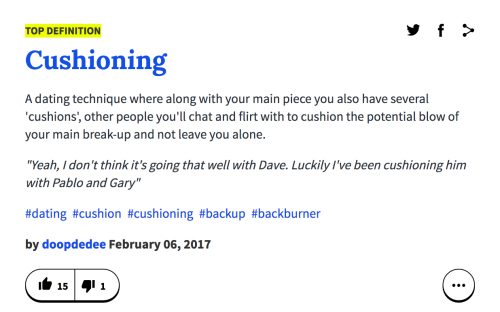 Though many people feel the practice is somewhat “harmless” because it inherently excludes physically hooking up, that doesn’t mean that cushioning is good for anyone’s emotional well-being.

Bottom line: cushioning is micro-cheating, because it is, essentially a kind of deception. You are pretending that you are committed to one person, when in actuality, you are spreading your (non-physical) affection amongst several individuals. It’s a tabling device, used to distance yourself from a romantic situation. And, while that instinct may be understandable and human, it’s also bullshit.

So, please — if you’re unsure about whether or not you want to be fully committed to one person, that’s a conversation you need to actually have with your significant other.

And if you’re simply afraid of being dumped? Then you just need to suck it up, because that’s how relationships fucking work.